The Evolution of No-Code, From the 80s to Today

No-code has broken down barriers to claim its place as a cornerstone of disruptive tech. But how did this revolutionary approach get to where it is today, and where is the future of no-code headed? 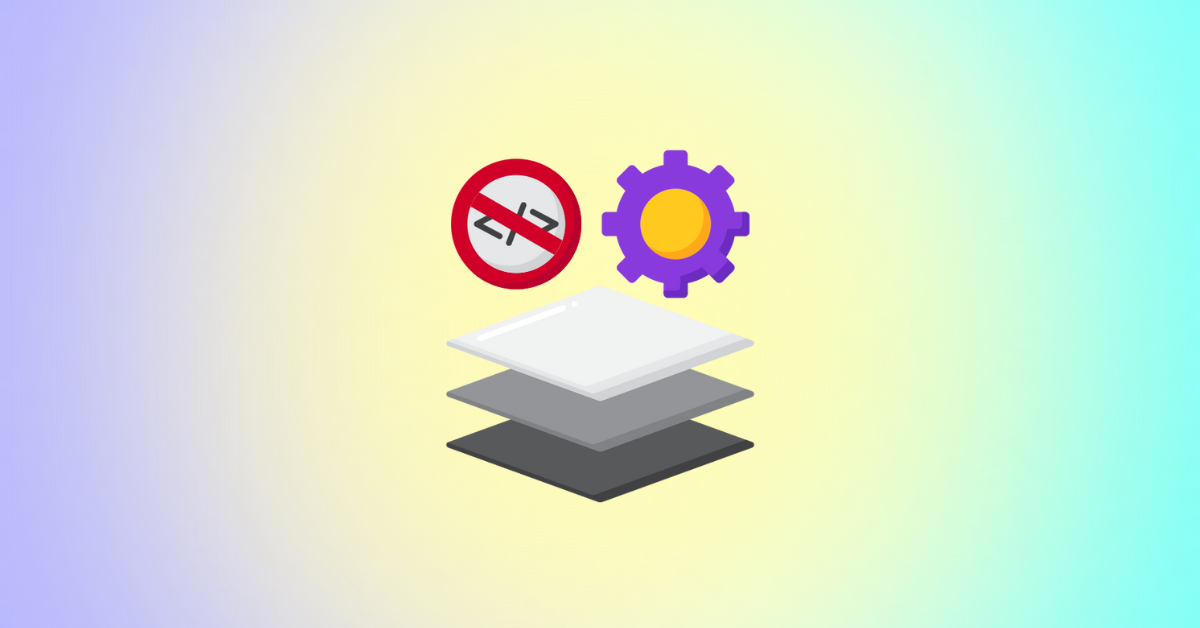 A far cry from its humble beginnings, no-code has broken down barriers to claim its place as a cornerstone of disruptive tech. The ease and accessibility of no-code apps has galvanized non-tech experts into building complex tools, and freed up time for seasoned developers to focus on higher-level tasks.

But how did no-code get to where it is now?

Keep reading as we take you through the evolution of no-code, from early developments to the seamless functionalities available today.

What is no-code and how does it work?

No-code offers the building capabilities of high-level programming languages to coders and non-coders alike. The no-code approach allows users to perform complex programmatic tasks without having to write even one line of code, much less understand it. Instead, users interact with graphical interfaces and templates to put together the software applications they desire.

No-code can be used to build mobile, web, and voice apps, internal tooling, integrations, and for task automation. The biggest learning curve is onboarding the desired platforms and integrating them into your tech stack.

And the output? Powerful, customized, scalable, and secure tools created for your specific needs.

While the term ‘no-code’ would not be catapulted into the limelight until the mid-2000s, it took early shape in one of the most fundamental tools we’ve all grappled with: Microsoft Excel.

Launched in 1985, many argue that Microsoft Excel was the first true no-code tool. Excel allows the average user to perform data manipulation and create in-depth data visualizations and analyses. A staple across millions of workplaces today, Excel has withstood the test of time as a highly versatile no-code spreadsheet.

The dawn of the World Wide Web meant more people were creating and hosting sites, but the process of building these websites remained time-consuming and taxing. Access to no-code site builders in the 90s not only reduced build time, but also granted citizen developers the autonomy to build their own sites.

Some of the first iconic no-code web-hosting services were Geocities in 1994, followed by Angelfire in 1996. In 1997, Adobe Dreamweaver was launched as a web development software tool. Armed with an intuitive visual interface, users were able to manipulate website components without using HTML. Dreamweaver was also one of the first applications to use the multi-screen format, which features a design preview alongside the edit mode.

While today’s visual interfaces have surely been modernized, these concepts and features remain standard to countless no-code apps.

In the 2000s, no-code continued to develop increasingly complex data solutions. In tandem, enterprise applications for managing data started to appear. The launch of site builders like WordPress and Squarespace heralded a new era of no-code, where ‘building in the browser’ quickly became the norm.

In 2003, WordPress and Squarespace’s launches introduced an impressive new array of no-code resources to help generate sites. As a Content Management System, WordPress boasts an impressive no-code editor, but one of its biggest standout features is its wealth of flexible plug-ins. Take Beaver Builder, for instance: a drag-and-drop page builder functioning from the front-end of a site. Squarespace, on the other hand, has been lauded for its polished and user-friendly visual design, offering diverse templates that typify Squarespace’s clean-cut and professional persona.

In the realm of e-commerce, Shopify was launched in 2006, allowing users to create online stores without the need for code. Shopify’s platform allows businesses to launch and run online stores from start to finish, from website creation to shipping logistics.

In the 2010s, the applications of no-code continued to evolve from simple website building to targeting more precise functionalities. The 2010s saw a need for solutions for workflows and databases, which largely targeted the non-technical end user. Apps like Zapier, Bubble, and Make (formerly Integromat) answered the call.

In 2011, automation platform Zapier was launched, connecting more than 5,000 apps together through a seamless API. Zapier went beyond automating solitary tasks to whole processes across different apps.

Just a year later, no-code app builder Bubble went live, a point-and-click programming tool that allowed users to create web apps with a simple responsive editor. Among the notable tools of this decade included collaborative app builders, along with a flurry of other flexible document and database softwares.

As COVID-19 forced us to take our offices online, we turned to no-code tools to facilitate the shift. According to Zapier, 82 percent of no-code users started using no-code tools during the pandemic. SMEs were among the key user bases reaping the benefits of no-code. The sudden shift to remote work required software that wasn’t a great fit for SMEs, which caused many to lean on no-code tools to create the custom apps and workflows they needed.

Among the platforms that garnered attention over the pandemic was app-builder AppSheet, newly acquired by Google in 2020. Other database and document no-code platforms gained billion-dollar valuations. Other apps decided to elevate their existing no-code capabilities: Microsoft announced the development of Loop in late 2021, featuring portable components that can be synced across the Microsoft 365 suite.

No-code tools are also being built on top of pre-existing no-code apps–take Softr and Stacker’s dependence on other no-code apps–adding to an increasingly interconnected network of platforms; however–the ecosystem is still maturing. All in all, we’ve only just seen the start of no-code’s capabilities.

The future of no-code

The no-code movement is continuing to take the world by storm–so what can we expect in the future?

We can surely count on increased adoption of no-code, for one. Gartner predicts that by 2025, 70 percent of new applications developed by organizations will use no-code or low-code tools, shooting up from 25 percent in 2020.

Going beyond business, no-code has applications for charitable organizations, and even in daily life. We may be seeing more personalized uses for no-code to make everyday tasks easier, from task management apps to customized schedule builders.

Until now, many existing apps have been built on visual innovations and visual programming. But no-code is also rich with potential outside graphic interfaces–for example, we may expect a shift to language-based interfaces, which incorporate Generative AI.

Language-based interfaces, like Skippet’s, offer an innovative way to tackle no-code projects. Most notably, there is the increased ‘human’ interaction between user and software. With more of a conversational experience, exchanges feel more personal and natural, taking the intuitive aspect of no-code to a whole new level. Accessibility is also tackled from a new direction: for those with mobility or visual impairments, tools can still be used as normal.

Primarily, language-based interfaces elevate ease of use. The time it takes to input a command or search for a function is immensely reduced–instead, all you have to do is ask. Importantly, the AI can suggest how to structure your application just based on a text description. This saves users time and cuts the learning curve by enabling the AI to figure out how to structure your app for you. Generative AI, that is, creating new creative content from text input, carries a huge potential for no-code applications.

No-code is democratizing technology for the future

Gone are the countless hours needed to learn complex development languages. No-code is opening the doors to actors of all sizes and programming competence. Along the same vein, one of the most notable strengths of no-code is that, by nature, it makes tech more inclusive. As a result, an increasingly diverse community is deciding what to create, and what innovations they want to see from no-code.

The era of no-code is still far from reaching its peak. As the industry continues to innovate, AI is also being integrated into these tools, making them more powerful and easy to use than ever before.

If you’re interested in integrating Generative AI and language-based no-code interfaces into your workflows, Skippet can help. Join our waitlist now to stay updated about our launch!